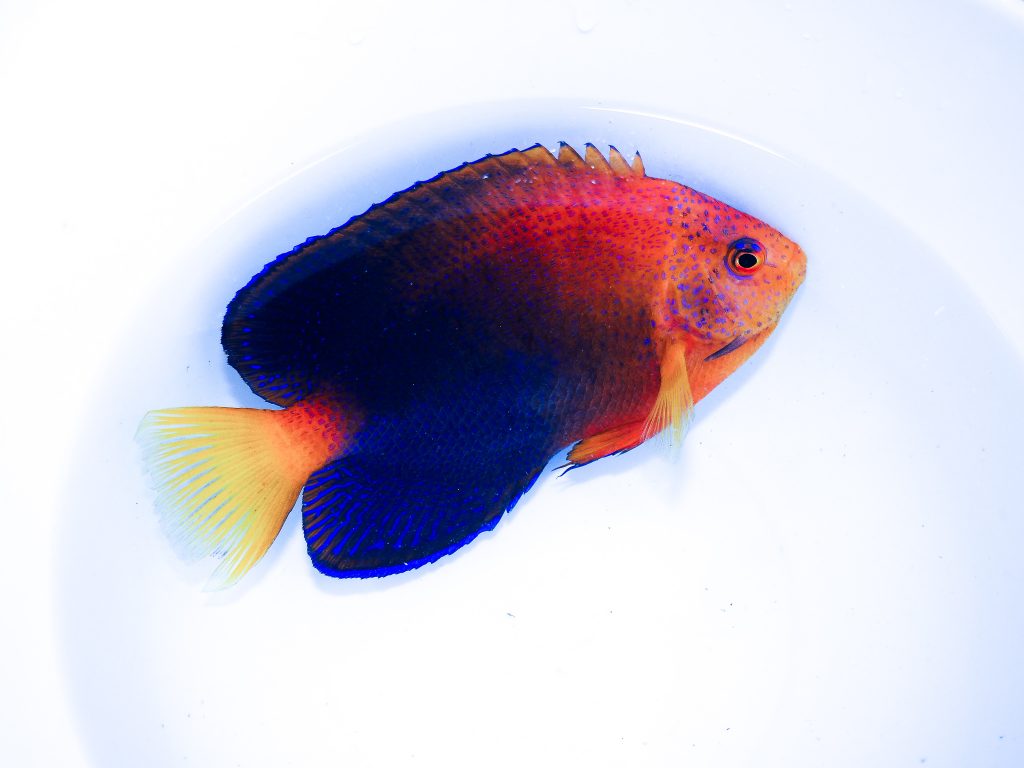 Dwarf angelfish are members of the genus Centropyge, which encompasses approximately 35 species. They are typically small, brightly colored fishes, ranging in size from 1.5” to 6” in length.  Flame angels (Centropyge loricula) are among the most commonly sold kept dwarf angelfishes.

Dwarf angelfish are found living in close proximity to the reef, often taking up residence in caves and amongst large coral colonies. They are omnivorous fish that spend their days grazing on algae, as well as catching zooplankton from the water column. Some species of dwarf angelfish are even known to be coprophagic, spending much of their time eating the fecal pellets of shoaling anthias and damsels!

Another very fascinating aspect of angelfish biology is their strategy for reproduction. They practice a reproductive strategy known as sequential protogynous hermaphroditism, in which fish are first transition from female to male. The sex of the fish is dependent upon the structure of the community or harem within which they are found. Most dwarf angelfish species are found living in harems with a single dominant male and several subdominant females. There is a clear hierarchy in these harems with the most dominant female exerting dominance over the next subdominant female, and so on. If the population structure changes and the male is lost either through mortality or emigration, the most dominant female will transition into male within a matter of days or weeks. Many dwarf angelfish species display visual differences in coloration and patterning between the sexes, allowing for visual determination of gender.

Dwarf angelfish are in many ways the ideal marine aquarium fish. They are considered a very hardy, do not attain an overly large size, and require only a minimal territory.

Due to their habit of living in close association with reef structures, as well as their relatively small overall size, dwarf angels are well suited to captivity. Smaller species such as the Cherub Angelfish (Centropyge cherub) will do well in pairs or harems in tanks as small as 20 gallons. Larger species may require larger tanks. It is important to consider the number of dwarf angels to be kept together. While they can be kept in small tanks as individuals, we encourage larger tanks when keeping them as a pair or harem.