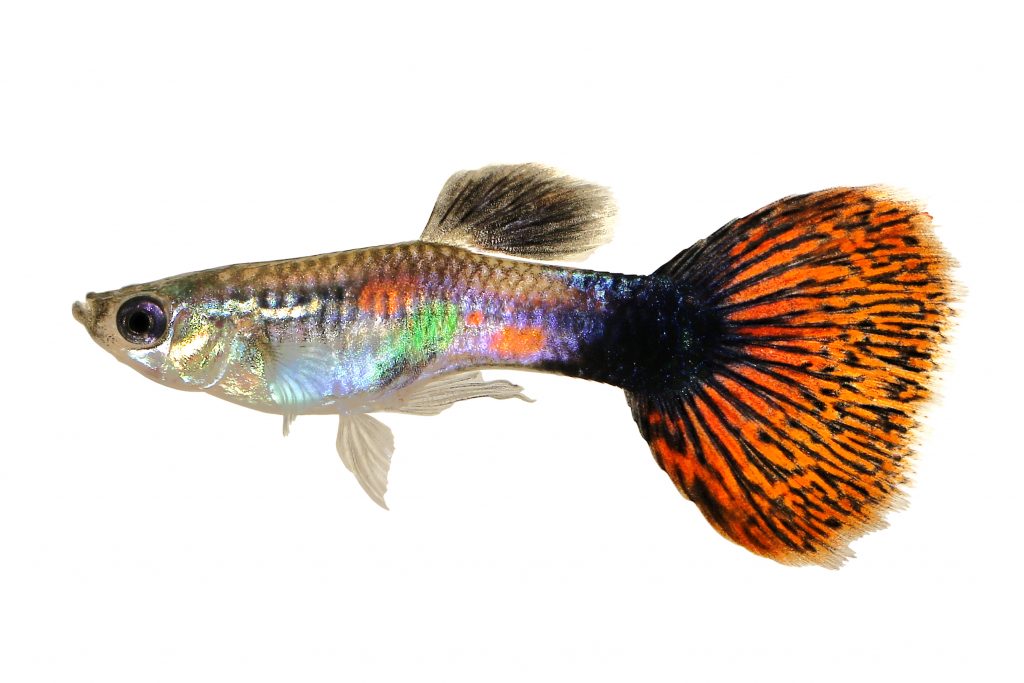 The Guppy fish, or Guppies, are a group of livebearers in the family Poeciliidae. They are very closely related the Swordtails, Platies and Mollies. There is only one specie of guppy in the aquarium trade, Poecilia reticulata, however there are many closely related species of guppy like fish that are often bred with guppies! Guppies have been bred in captivity for many decades, and there are now hundreds of strains found all over the world. They are very popular aquarium fish due to their bright colors, array of patterns and sociable nature.

Guppies are native to the northeast of South America where they are found in many different river drainages throughout their native region. However, they have been introduced in drainages throughout the world as a means of mosquito control. Guppies are sexually dimorphic, with male guppies being much smaller and brighter in color than the larger more drably colored female guppies. Male guppies typically reach 1.4” (3.5 cm) while females can reach 2.4” (6cm).

Guppies can make great aquarium inhabitants, provided their husbandry needs such as diet, water quality and tank space are met.

Guppies can tolerate a wide range of water temperatures, and can do well at a range of 64F (17C) to 84F (28C), however they tend to prefer the middle of that range.

Guppies do well in community tanks, provided they are not kept with large or overly aggressive fish. Many fish will pick at the tails of fancy male guppies, so avoid boisterous fish. As with most live bearers, it is generally suggested to keep guppies at a ratio of two to three females for every male. The males can become quite boisterous during courtship, so having several females helps spread out the males attentions.